Scariest and grossest thing today. We were gardening as a family, which is wonderful. Chloe decided we all needed to wear our gardening gloves. She found hers, Bracken already had a pair on, so she found me a pair in our old gardening box. I was doing something else, so I put on my left glove and just held the right one for a few minutes. When I looked down, I saw a spider egg sack on it, and it looked like it was moving! I poked it with a stick and it definitely moved. I set in on the ground and tore open the sack. A fully grown black widow came running out. I stomped it, as my heart stopped for a moment. I'm just so grateful Chloe wasn't hurt, and that I wasn't hurt, and that I noticed the egg sack. The Lord is aware of us in the small moments.

I had that reaffirmed as I just checked out my email and found that my brother Ben had not gotten the birthday package I sent him. Huge bummer, but oddly enough, though I never get insurance on the packages I send, I did get it on this package. Another blessing.

And on a less spiritual note, can I just mention something I've been thinking about? I've been trying to get into more of a shape before our trip to Cabo, and I've noticed something interesting. I'm simply amazed at how I can look in a mirror, and feel good about the progress I'm making. Then I step on the scale and look down at the weight. When I look up, registering the (usually) bad news, suddenly I look heavier in the mirror as well! Am I the only one this happens to?
Posted by Ruth M at 7:32 PM 2 comments:

Chloe and the Worm

The saga continues. I know at least one more worm who doesn't want to be her valentine. I was gardening yesterday and she was helping and we found another worm, probably the most active one we've seen. She picked it up and disappeared, and I promptly forgot all about it. I had a passing wonder about it as I was finishing up, but hoped that all my reminders about putting worms back in the dirt had taken effect.

I was wrong. Later that afternoon, Chloe said, "Worm, worm!" and pointed to the remainders of her breakfast bowl of cereal that I hadn't cleaned up yet. With fear, I asked, "Is the worm in your bowl?" and she said yes. I stirred around and found the dead worm under the remaining Cheerios. Gross and sad. I'm sure she was only trying to feed the worm, but it still resulted in his demise. Guess I'm going to have to supervise her worm wrangling a bit better.
Posted by Ruth M at 8:58 AM 2 comments:

So, I just spent the last 45 minutes typing up a wonderful blog entry, and then I lost it. I'm a little frustrated. I'll have to see if I can recreate it in any re 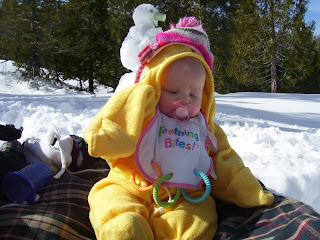 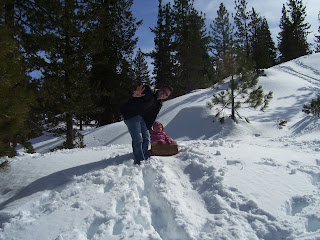 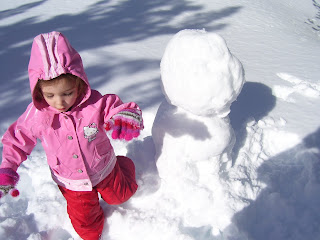 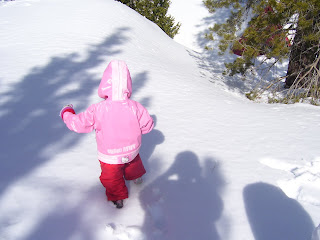 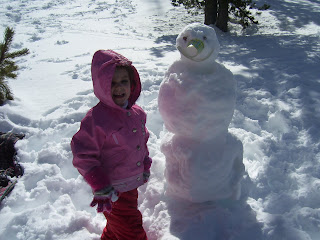 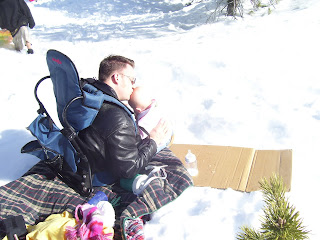 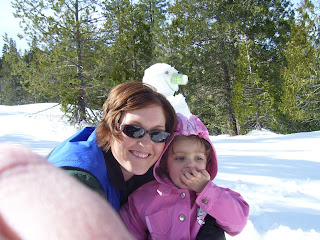 We went up to the snow this weekend. I know that sounds strange to those of you trapped in the snow and desperate for winter to end, but we've got a little girl here who is in love with the idea of snow. This was the first time all winter she's been able to see it as our trip to Utah for Thanksgiving was simply cold with no precipitation.

We had such a lovely day! It was the first weekend the weather's been clear enough to travel up into the mountains. Not only was it clear, but it was warm. I was comfortable in only a shirt and vest. The snow was untouched, which made walking a bit hazardous. Several times we took a step and found ourselves up to our hips in snow. Chloe soon figured out that the best was to maneuver was to slide on her stomach.

It was perfect snowman snow. Chloe and I quickly make a snowman, and I realized I hadn't brought anything for a face. We improvised with two dead batteries and a paper cup. I also didn't have a sled for her, but we made do with a piece of cardboard, which worked just fine. I brought a thermos of hot cocoa with us, and it was almost too warm to drink it. Apparently Chloe thought so, because she chose to pour her cocoa all over our snowman. Or maybe she was just trying to share? We finished our snow day with a meal at Ikedas, our favorite place for burgers and pie in Auburn. It was one of those days that we just savored every moment of. I sure do love my family. 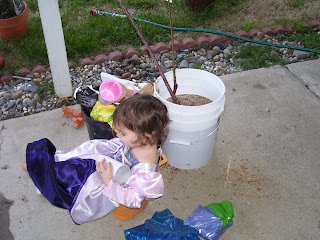 Chloe has been a crack up lately. Just look at her picture. I was gardening today, and I told her she needed to get dressed before she could come out and join me. She had taken off all of her clothes while using the bathroom earlier. I intended for her to put those clothes back on, but instead she came outside with her princess dress and a pair of sneakers on. She then sat herself down in a bucket and used a cup for a shovel, and had a great time. Earlier in the day, I dug up a worm and gave it to her and told her she needed to be careful. She said, "I not hurt it. It's okay." A few minutes later she came back saying, "I broke it, Mama. I broke it." Big surprise. Good thing the ladybug she caught had the good sense to fly away. The next worm she got stayed in one piece, though he did get an extended tour of the backyard, and would have stayed with her the rest of the evening if she'd had her way.

Chloe really loves to sing, and for the last week or so has chosen to sing instead of speak a lot of the time. I decided to teach her "I'm so glad when Daddy comes home" to surprise Bracken. I've been singing a line, and then leaving off the last word or so for her to fill in. Today it went like this:
Me: I'm so glad when Daddy comes home. Glad as I can be. Clap my hands and shout
Chloe: Hooray!
Me: And climb upon his
Chloe: Mountain!
Me: Put my arms around his
Chloe: Necklace!

And on it went.

Addie has been doing some major changing this week. She has discovered her tongue, and we are amazed to see how long and pointy it is. I have to say, it's about the cutest tongue I've ever seen. It sure did crack up the people behind us at church as it kept sneaking out of her grin. Addie has also learned to sit this week. I think those chunky legs help give her a nice st 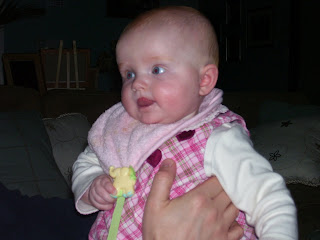 able base. She hasn't rolled from back to front yet, but she did manage to turn herself 180 degrees on the floor earlier tonight. I'm actually really looking forward to her being able to move. I think she'll be so much happier.

But not as happy as she'll be when she finally gets to eat real food. Given a choice between a toy and something someone else is eating, she goes for the food everytime. Or a piece of paper. Funny girl.

The best thing about Addie this week, though, is that she is finally sleeping from about 7pm until 5am. It's amazing! We finally decided we had had enough, and just let her grumble her way through a couple of nights, and she really quickly started sleeping through. Hallelujah. Last night was a bit rocky, but at least we now have hope.

And as for me, there was something I wanted to write about earlier today, but now I have no idea what it was. Probably because both of my sweet, beautiful girls decided to wake up and be up at 5 this morning. What are they going to do to us when they can actually talk and plan out ways to conspire against us?
Posted by Ruth M at 7:48 PM 2 comments: