Yesterday we packed up the kids in the stormy weather and headed to the Children's Discovery Museum in Sausalito. We had a pass that was expiring, and though we felt guilty about not being able to watch General Conference, it actually worked out really well. We listened to conference on the Mormon Channel, and the kids were actually much quieter in the car than they would have been in the living room.

Five umbrellas strong, we marched through the wind and rain into the art area. And then, when the kids were done in there, I looked outside and miraculously, the rain had stopped. We ran out to the playground. And saw this. 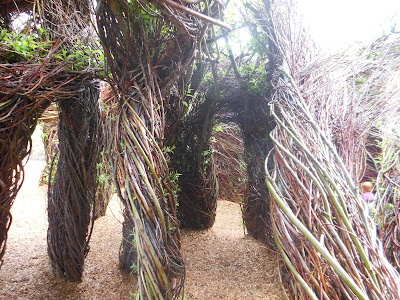 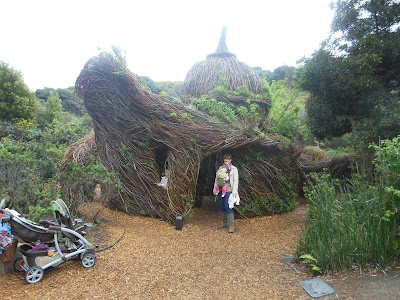 There was a new art installation by Patrick Dougherty, and it was one of the most beautiful things I have ever seen. 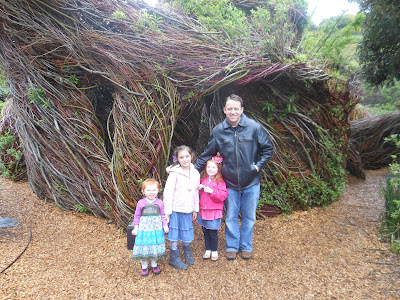 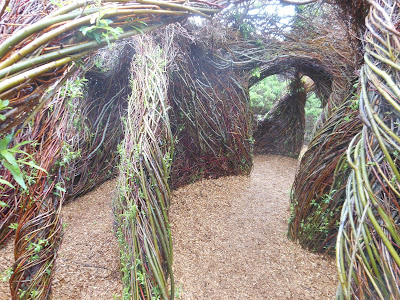 I think even Rosie was impressed. 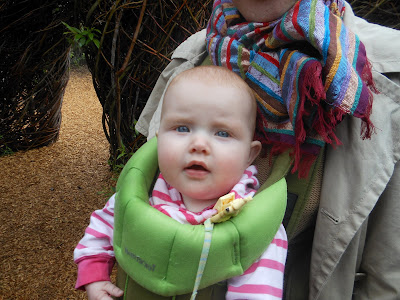 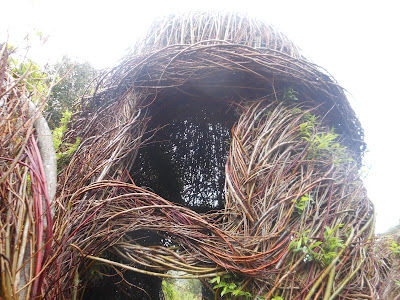 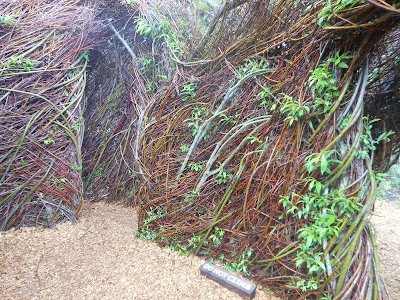 Now I want to gather willows and build in my own yard. 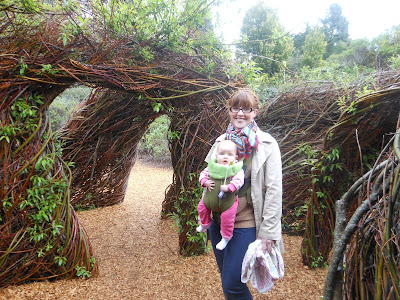 I Pity the Fool

April Fools' Day is usually one of those holidays I think about when it's too late to do anything about it. And then Chloe started school. Suddenly last year it became a bit deal, and Chloe constantly brought up the tricks she was considering, and the tricks she was hoping for. Last year I made Fake-on and Eggs for an all candy breakfast. This year I went bigger. I planned ahead.

This morning, the girls woke up and sat down at the table for their customary breakfast. Only for some reason, when they went to scoop up their cereal, they couldn't get their spoons into their bowls. 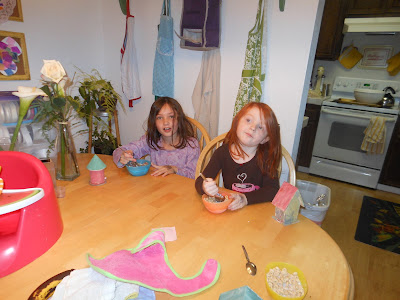 Because I had frozen their bowls of cereal the night before. Both Chloe and Addie thought it was hilarious, and made very serious attempts to chisel the cereal out of the bowls. Maggie did not think it was so funny. 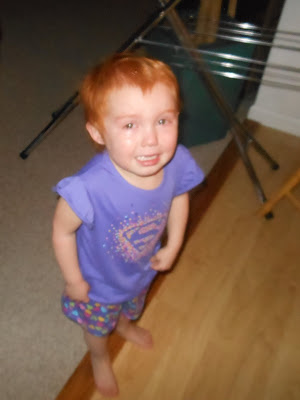 But that had more to do with the fact that she didn't want cereal for breakfast. She wanted toast. We finally talked her down and fed them all Mickey Mouse pancakes for breakfast. But Maggie's April Fools' trick wasn't over yet. When it came time for lunch, she cried again because now she wanted frozen cereal.

I had one more trick planned for the morning. I emerged from my room wearing a wig, and told the girls I had cut all my hair off. They were pretty diplomatic about my new look, but were relieved that it was just a wig. 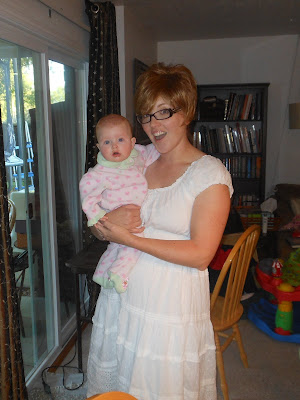 Plus, it turned out someone else needed the wig a lot more than I did. 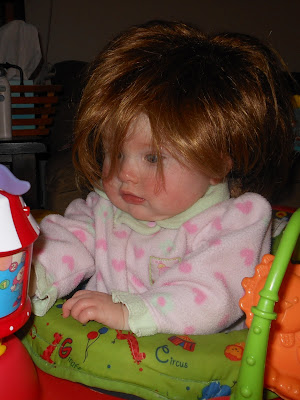 The girls were very excited to get cupcakes and grape juice for dinner. 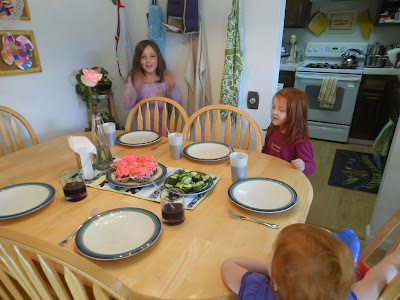 They all grabbed their cups and started sucking as hard as they could. 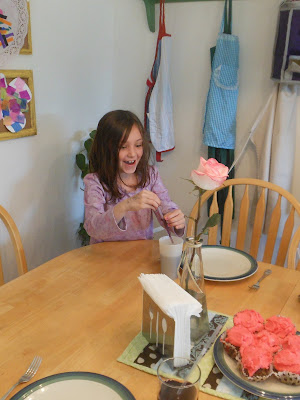 Maggie sucked so hard, she collapsed her straw. 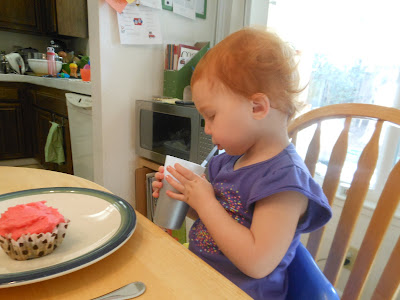 Once she actually pulled the straw out, she was pretty excited still. 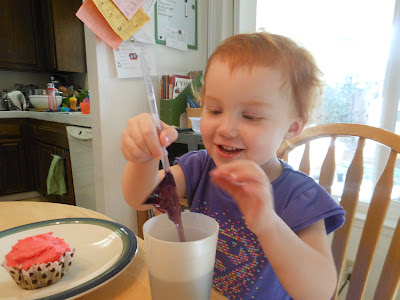 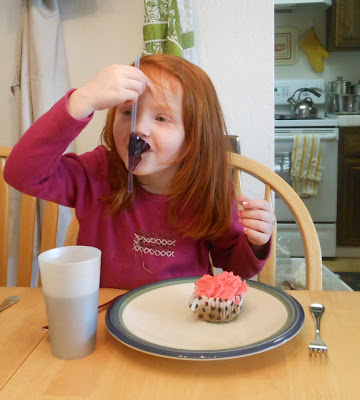 They were all excited about the cupcakes as well, until they tasted them. They were a hard sell once the girls figured out they were meatloaf with mashed potato frosting. But I thought they were quite yummy. 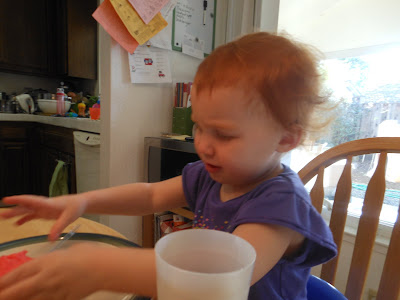 The cucumber springs were another winner, though. 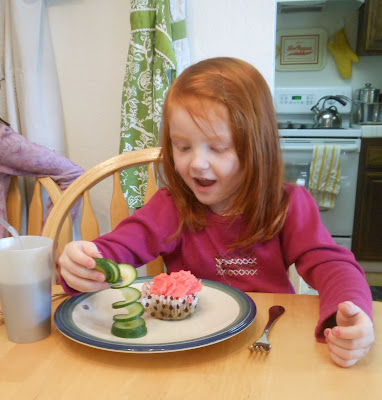 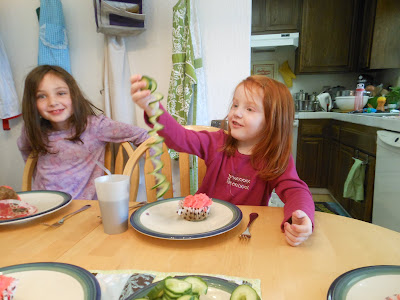 Finally, for those who actually ate their cupcakes, I served "mashed potatoes and gravy." It tasted amazingly like ice cream with caramel sauce. 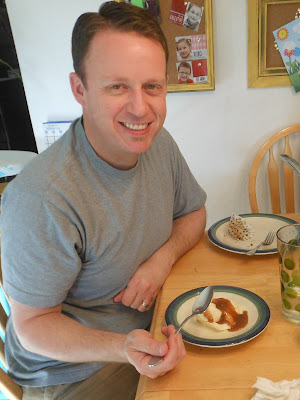 It was awfully fun watching the girls' eyes light up with each new trick. Ultimately, though, the real fool in this situation is me. I think I may have set the standard a little bit high. What on earth am I going to come up with for next year?
Posted by Ruth M at 8:30 PM 1 comment: