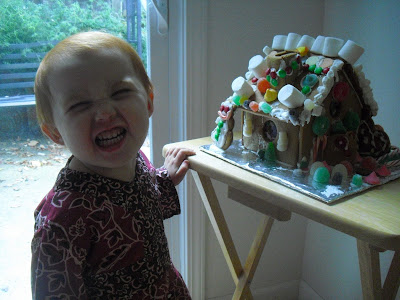 And no, I'm not referring to this little grinner as "my crazy."
For the record, I come by my crazy totally honestly. My sister got married in October of 1999. My mother had been battling stiff-person syndrome for 13 years and was nearing the end of her fight. She stayed in the hospital up until a few days before my sister's wedding so she could be as healthy and stable as possible for the big day. For months leading up to the wedding, she sat in her hospital bed with all her candy making tools on the bedside table, making chocolate cups for the wedding reception. She also needed to make the wedding cake when she came home. Had she ever made a wedding cake before? No. But that didn't slow my crippled mother down in the least. And the cake she made was in the shape of the Mt. Timpanogos temple. With stained glass windows. My mother passed away less than 3 months later. She was literally dying and continued to make things seemingly beyond her skill set simply because, as she had once said while contemplating the construction of her first (and only) man's suit, "I think I can do that."

Forward 13 years to yesterday. Our ward had announced that there would be a gingerbread house competition at the annual Christmas party. There would be categories for children, youth and adults. Now, we make a house every year. I've posted instructions as to how we do it. I've often made gingerbread for more than one house a year, but only because we've often hosted gingerbread house parties. We've never made more than one for ourselves. But I heard the word "competition" and my crazy went into overdrive.

I had hoped to get the gingerbread made before Saturday. But I ended up doing an arrangement for a funeral, and making a shepherd/Jedi robe for a nativity play, attending a Christmas party back in Citrus Heights, and oh yeah, taking care of a cute little 6 week old girl and 3 other children. And so, Saturday morning I started making gingerbread. I put together a house for the girls, then completely stepped away as they decorated. I did this so I could, one, get the pattern for my house printed and enlarged, and two, so they could have complete creative control without my control freak tendencies stepping in. It kind of was a mistake to stay so far out of it. I put out a lot of candy for them to use, and very little ended up on the house. Whoops. 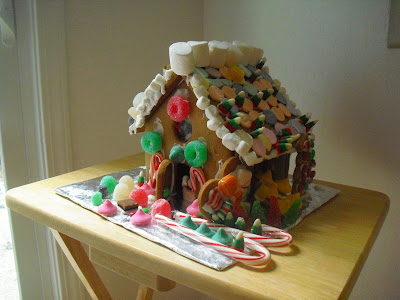 The little "garden" out front was Chloe's pride and joy.
Then I started making my house. I used a pattern from a book, not realizing quite how large the finished product would be when I started. It was easily 4 times as large, and 4 times as complicated as anything I have made before. But I said to myself, "I think I can do that." 3 batches of gingerbread later, I finally had all the pieces baked, complete with stained glass windows. I kept those sheets of gingerbread moving in and out of the oven as fast as I could, watching the minutes ticking away, realizing there was no way I could get this done in the time I had left. I ignored my sad baby who really wanted Mom and not Dad. I started to sweat. And yet I pushed on because I was too invested to give up. A piece broke as I started to assemble the house. I baked a new one. I got all the walls together and the house standing. I hurriedly decorated walls.

And then I put the roof on. I realized as I placed the second roof piece that it was slightly undercooked. But I had no time to make a new one. I've never lost a piece of gingerbread yet, and trusted that even if it was a little soft, it would still work. I added extra icing, and started to decorate. Then the back slid off, and the front started to collapse. I pushed the back up, and enlisted Bracken to hold it and my baby while I finished the final details. 15 minutes after the party started, I threw on some clothes, tied my hair into a bun and loaded everything and everyone into the car. As we drove, I touched up the makeup I was still wearing from the night before. And listened as the roof of my house fell apart in the back of my van.

We arrived at the party, and I jumped out of the car to survey the damage. The front of the roof was in pieces, but had conveniently crumbled inside the house. The back had slid completely off, and cracked down the middle. I debated whether I should bring it in. I also apologized to my husband for all the chaos the creation of this behemoth had caused. Ultimately, I decided to display it, adding a note that "heavy snow" had caused the cave in. I was more than a little embarrassed, but decided that I was illustrating the idea that it is better to try and fail than to never try at all. I happily cheered for my daughters when their entry won first prize in the children's category. I was shocked when my entry won in the adult category. I'm not sure if I won out of pity, or just for the sheer size of the monster. Maybe the judges were afraid of the lingering crazy they could see in my eyes. 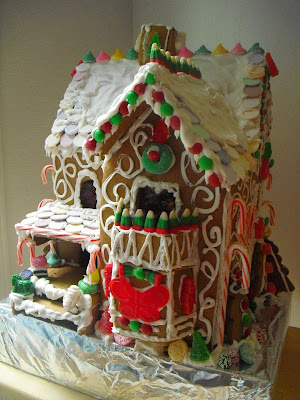 As we drove home, I attempted to tell Bracken a joke about how tired I was. Halfway through, I stopped because it really wasn't funny, and I couldn't remember how I was going to end it. When we got home and got all the girls down, I collapsed into bed. I was wakened in the night by the cold I had been fighting rearing its ugly head. I managed to get a little more rest, but when Rosie got up to eat at 5, I couldn't get back to sleep. Instead I got up, made another batch of gingerbread, and reassembled the roof, decorating it with candy I had salvaged from the original. I also made muffins, cleaned the kitchen a bit, and cut up some fruit (to help remedy the damage wrought by unsupervised candy gorging). Because I am crazy. And now, for the rest of the holiday season, I will be able to look at the physical evidence of my craziness. 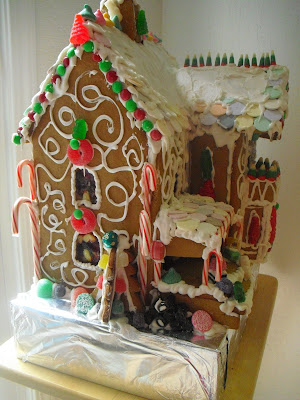 In actuality, though, I am kind of grateful for this episode of crazy. Truth be told, the creative crazy had been completely absent throughout my entire pregnancy, and I was a little worried that it was gone for good. Though I sometimes struggle to recognize my limits, and my projects get a little out of control, I love creating and making and having projects to do. So, welcome home, Crazy. You have been missed. 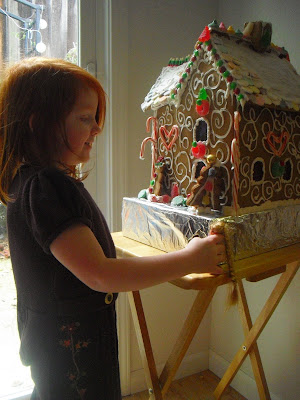 I'm pretty sure the little Rapunzel doll she's holding will find her way into the house before the holiday is over.
Posted by Ruth M at 6:46 PM 4 comments: