Deep thoughts from Chloe
On tears: Mom, I might cry a little, but it's not because I want to go to bed. It's just my hot cocoa is so hot.

On jealousy and Rosie: I think she looks sad because she thinks you're going to get mad at her because she winked at me and not you.

On obesity, after I told her to stop eating candy: But why, Mom?
Me: Because eating too much is unhealthy.
Chloe: And it can make you fat. But you wouldn't make fun of me if I was fat.

Dramatics from Addie
When her sister refused to kiss her: I just want to live in a world where people love me!

When I insisted she eat her dinner: I have a ridiculous life, I just want to die!

When she couldn't play with the toy she wanted: I just don't feel special. I don't want to live here anymore. (And then she went and opened the front door. I talked her back into the house, mainly because I knew I didn't have the energy to find her later.)

When I insisted she take a nap today: I don't want you to be my mother anymore. 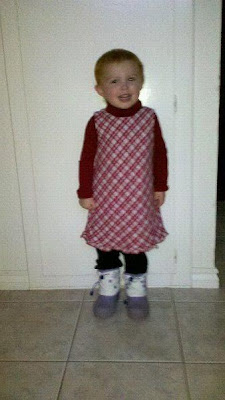 I guess she wanted to listen to the sound of crunchy autumn leaves. 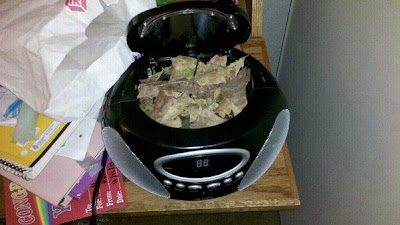 I asked her to change her pullup, but didn't follow through to make sure she did. I had no idea her pajamas had such wicking power. 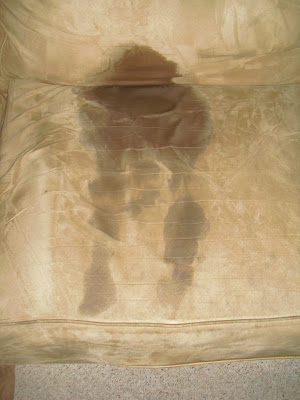 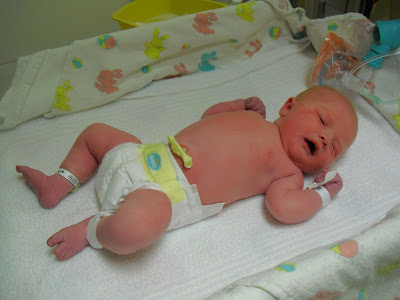 I need to get this written down before I forget, since it's already becoming a blur. This may get a little long, but that's because it's mainly for me, and Rosie.

Our little girl was due to arrive on 14 October. Given the fact that I was induced with all three of the other girls, I really didn't expect her to come on her own. But I had a little bit of hope, mainly because I just really wanted to feel what it was like to go into labor on my own. I also was nervous about being induced this time.

The day after my 20 week ultrasound, I got a phone call from the genetics department at the hospital. During the ultrasound, they had found that my umbilical cord only had one artery, instead of the two it was supposed to have. Single Umbilical Artery (SUA) is a fairly common condition, but is often accompanied by other birth defects, so they needed me to come back in for an additional, more thorough ultrasound to make sure everything was okay. Two days before our move, when I was already more than a little stressed, I went back in for another ultrasound. Thankfully, everything looked fine. I had also opted to do the additional genetic testing with this pregnancy, which I had opted out of with the previous ones, and all those test results looked normal as well. 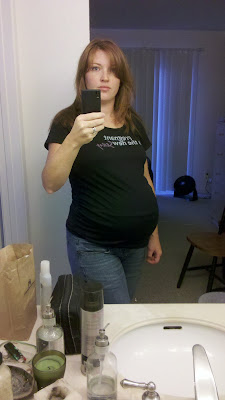 Me at 41 weeks. The shirt was a gift from my sister and reads "Pregnant is the new sexy." I was definitely feeling it.
However, this reminded me that there had been an issue with Maggie's umbilical cord, so I called my previous doctor to find out exactly what it was. After Maggie was born, and they were examining my placenta, they discovered that there was a velamentous cord insertion. This means that rather than the cord inserting into the middle of the placenta, the cord inserted on the edge. The cord is then less protected and more prone to damage, and possibly hemorrhage. Everything is usually fine, but when I read that there is an increased risk of velamentous insertion with SUA , that sometimes the cord can get snagged if your water is broken by the doctor, it made me nervous. And then I googled more, which is very unwise, and learned that the medications often used in induction, particularly when ripening the cervix, can negatively impact a baby with SUA. Although generally I felt like things were going to be fine with this little girl, these other worries kept nagging me, particularly as I got closer to my due date. 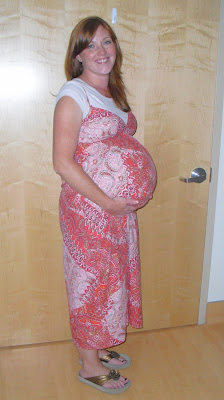 That is a big belly.
My due date came and went without any action on my part. I was having contractions here and there, and my cervix was still a 1. My insurance provider's policy is to not induce before 41 weeks, so I was grateful (though nervous) when I was able to schedule my induction for 41 weeks and one day. Not that that made the time pass any more quickly. As the week wore on, my mood declined. I started avoiding leaving the house because I was tired of answering people's questions about when my baby was due. Then I found out there was a good chance the hospital would be full on Saturday, and I might not be able to come in that day. I was supposed to call the hospital at 5, and was very relieved when I got a call at 2 inviting me to come into a different hospital at 4. I didn't care where I had this girl, just as long as I had her. 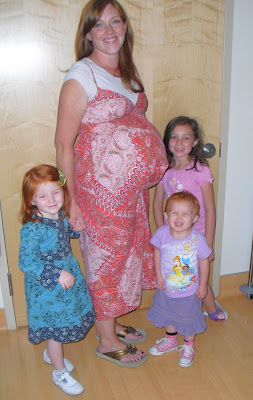 We ran a few errands, loaded up the car, and drove to Antioch. This was actually a newer and nicer hospital, though just a little further away. They admitted us right away. We had brought all the girls with us, and they were sure excited and interested in everything going on. The nurse got my IV started immediately. She did a great job, but it was very stressful for Addie to see me getting poked. Even the next day when she came to visit, Addie was still very concerned about my IV. The midwife checked my cervix and decided it looked favorable enough to start the pitocin without having to ripen my cervix first. This was a big change from my previous inductions. Typically, they insert a misoprostyl pill, which I respond very well to, but it's at least 6 hours before they can actually start the pitocin. So, not only did my induction get started faster, but my worries about the medications used in the induction were lightened. 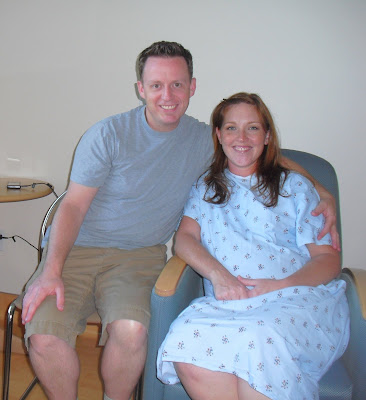 Bracken left and brought the girls to our generous friends who kept them overnight. I got started on the pit, and my contractions started right away. Bracken returned and we played card games while my contractions intensified. At about 10:00, my water broke on its own. I've never felt that sensation before. It was another huge relief to me that it broke by itself. They checked my cervix shortly thereafter and found I was about a 5, and since the pain was getting pretty intense, I asked for my epidural.

As always, the longest part of labor was the amount of time between when I asked for the epidural and when the anesthesiologist actually arrived. But once she finally got there, it was the fastest, smoothest epidural I've gotten. Once it kicked in, my whole body relaxed. In fact, when they checked my an hour later, I had dilated from a 6 to a 9. 30 minutes later, I was complete. I started pushing at 1:40, and things moved quickly. I got to reach down and feel her head as she crowned. At 1:54 am on 23 October 2011, Miss Rosemary Ruth Mannion arrived. 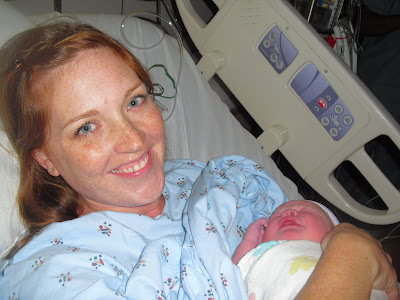 And that's when things got a little interesting. I remember sitting in a birthing class back in 2005, eight months pregnant with Chloe. I raised my hand and asked, because it had been weighing heavily on me, "How often are babies born with the cord around their necks?" The instructor quickly replied, "Not very often. It's nothing to worry about." Well, 4 births and 3 cords around the neck later, I do know that it is nothing to really worry about, but it does happen often! Rosie had the cord around her neck, but it hadn't tightened. She got an 8 on her first Apgar, and a 9 on her second. And it turns out, the cord was slightly velamentous again. It's a good thing I'm not planning on making any more umbilical cords because I am not good at it! Either that or I'm just too creative at it. 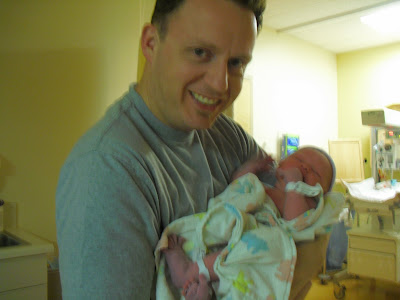 Then they weighed her. Because of the SUA, I'd had an extra ultrasound to monitor Rosie's growth. Though everything looked fine at the 21 week ultrasound, there is still a concern with SUA babies and fetal growth restriction. At 30 weeks, she was right on target for size. My other babies all weighed within 2 ounces of each other, and I gained about the same amount of weight, so I thought it would be pretty obvious if her growth had been affected. As always, I laughed when the midwife checked my belly and told me she thought the baby would be about 7, 7 1/2 pounds, but definitely nowhere near 8 1/2 pounds because that is what I have been told every single time. But still, I wondered. When they finally weighed Rosie, about 2 hours after she was born, she was 8 pounds, 11.5 ounces, and 20 inches long. My heaviest baby by 3.5 ounces. Take that, SUA. We beat you on every front (knock on wood). The nurses kept commenting on how big she was, but she still looked tiny to me. 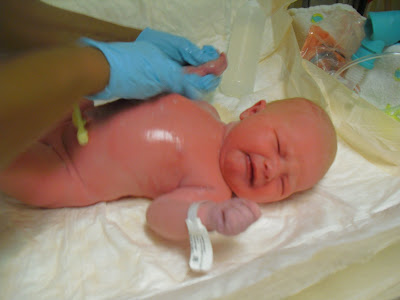 The most dramatic part of the delivery, though, was what went on in those two hours between when she was born and when Rosie was finally cleaned and weighed. Though I only had a first degree tear this time, for some reason, I started hemorrhaging after Rosie was born. I had to have extra medication, and some extra procedures from the midwife to get it to stop. All the nurses and midwife kept blaming it on the fact that I'm a redhead, but it's never happened to me before. Is it because I've given in and started dyeing my hair redder? I really don't know. Thankfully, the bleeding did stop after I'd lost about 3 pints of blood. I felt awfully calm throughout the whole process. Maybe I was just super tired, or maybe the whole process was just surreal because it was so much shorter than my other labors (only 8 hours!), but I was peaceful during the drama. Given how short my labor was after I finally got the epidural (only about 2 hours), I've wondered if I really needed it. However, I know it did speed my labor up, and the more I reflect on everything that went on after the birth, I'm glad I had that buffer against the pain in place, because otherwise it would have been rather rough. 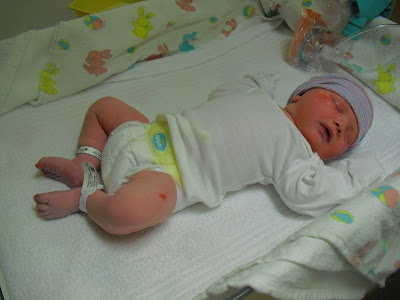 We are so glad Miss Rosemary Ruth is here. She is named for Bracken's aunt, and for me, obviously. Since our daughters' hair has gotten progressively lighter with each one, it seems fitting that thus far she seems to be blonde with a hint of red. I was actually hoping for a blondie this time, and Chloe had been praying very earnestly for a "yellow-head." Her eyes seem to be blue, but I won't put any money on it until she's at least a year old. What I do know is that we love our little girl and know our family wouldn't have been complete without her.
Posted by Ruth M at 10:52 AM 3 comments: