On Breastfeeding (and I will be discussing nipples, graphically) 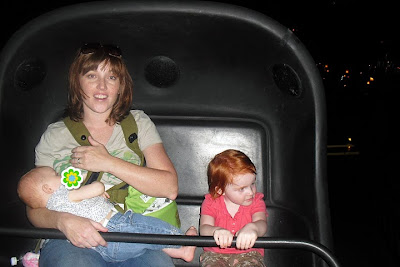 Me, on the Haunted Mansion ride at Disneyland, informing Bracken that this is not the best time to take a picture of all the girls.
Since I am due to have a baby in about 3 weeks, many things are on my mind. One of my random google searches was for preparing my nipples (and we're off) for breastfeeding. Since this is my fourth child, I have, of course, nursed before, but I was curious if there was any new information out there. The answer is no, but once again, I was completely angered at the misinformation most of the breastfeeding advocates put out there.

Don't get me wrong--I am pro-breastfeeding. I have spent three full years of my life nursing 3 different children and plan to spend another year at least doing the same for this new one. I support the right of women to nurse their babies whenever and wherever they see fit, though I also advocate being considerate of those around you (and I'm mainly talking about teenage boys here, though I have been oogled by a 7 year old). I tend to nurse covered myself unless I am only around other mothers and children. I also find that once my babies are old enough to start moving around a lot on their own, it's not really effective to try to nurse in a public place. It's just too distracting for them.

And here I'll confess something. I get the stigma about public breastfeeding. Despite all the time I've spent with a baby at my breast, when I am not lactating, I have often found breastfeeding creepy. I have caught myself looking at a 9 month old and thinking, "That baby is way too old to still be nursing," when I have nursed all my babies far longer than that. Hypocritical and prudish, I know. What I don't know is where that knee jerk reaction comes from.

I also try not to judge those who don't breastfeed. It's a very personal choice, and there are a lot of factors in why a woman will or will not breastfeed. I personally have had a very easy time of it, and I recognize that. I'm a stay at home mom, my milk comes in on time, I make enough but not extra, I have very rarely been engorged and I've never had an infection. I'm not going to go into all the scientific reasons why breast is best because even though I know it's been proven to be the healthiest choice, I also don't feel that giving your baby formula is equal to filling their bottles with soda. I also know I've saved a lot of money with all the formula and bottles I haven't had to buy. That said, I had two babies who completely refused the bottle, so I really had no other choice. The one child who would take a bottle weaned herself the earliest.

But here's where I have my real issue with the nursing nazis. As I visited half a dozen different breastfeeding sites, I found they all told the same lie. "Nursing will not hurt if you are doing it correctly." That is a steaming pile of poop. Sure, after a month or so, once you're used to it and your milk supply has regulated, nursing shouldn't hurt. But no matter how good your latch is, no matter how many times you switch positions, no matter that you follow every rule in the book, THE FIRST TWO WEEKS WILL HURT LIKE HELL.

Yeah, I said it. Your poor nipples have never been though abuse like this, unless it was the last time you nursed, and since then the callouses have worn off. It will start out fine, and the baby will latch on in the hospital, and maybe you'll have the lactation consultant come in and help you out a little and you'll feel like you've got it all under control, and they will send you home.

And that's when it really starts. Your nipples will start to feel uncomfortable, and then they'll get a little blistered looking. Then they will scab, scabs that will be loosened or pulled off with every feeding session. Every time your baby latches on your feet will lift from the floor as you attempt to silence the screams building up inside. If your husband tries to talk to you while your baby latches on, you will have to control the urge to punch him in the throat. And your baby will be latching on constantly, because they seriously do nothing but eat and sleep and poop, and often all three at the same time. But in about two weeks, your nipples will have become leathery, the scabs will have fallen off, and with great surprise you will realize that the tear trickling from your eye as you feed your baby is from love and not because your breast feels like it is on fire.

I seriously wonder how many moms give up too early on breastfeeding because they think they are doing it wrong, because they have been told it will not hurt at all. I'm sure it takes longer than two weeks for some people, and maybe there are some miraculous people out there who can escape that two week window of hell. For the majority of women, though, I know it's going to be a rocky start. I promise you, in most cases, it will get better. So much better. And you will look down at your sweet little baby, milk drunk and grinning in her sleep, and realize these are some of the best moments you will have with her.

So I encourage you novices to endure, and I thought I'd share a few of the products that have helped me the most.
And now I'll get off my soapbox. I just needed to get that off my chest before my chest is consumed with more pressing matters. Breast of luck! Anyone else have any good ideas to share?

(None of these brands know me, I'm just sharing what has worked.)
Posted by Ruth M at 9:09 AM 7 comments:

I picked this recipe up last year when we were driving through South Lake Tahoe. We stopped at this place that looked like a total hole in the wall, but was actually quite a fancy little soup place. They had this recipe on the counter, and I thought it looked quite tasty. I did modify it a little, adding salt for instance (Baking without salt? Come on! Don't the 4 cups of fruits and vegetables in the recipe make it healthy enough?). These muffins are incredibly tasty, have really good texture, and are perfect for using your end of season garden harvest.

2 cups carrots, finely shredded
1 cup zucchini, finely shredded
1 cup apples, peeled and chopped
3/4 cup flaked or shredded coconut
1/2 cup chopped almonds
2 teaspoons orange zest (or 1/2 t. orange extract)
2 cups flour
1 1/4 cups sugar
1 tablespoon ground cinnamon
2 teaspoons baking powder
1/2 teaspoon baking soda
1 teaspoon salt
3 eggs, lightly beaten
3/4 cup vegetable oil
1 teaspoon vanilla
So simple, so yummy, and healthy. But just remember, if you get to work early one morning and make these with your preschooler for her class snack, don't include the nuts. Otherwise, when you pick her up later, you will feel really stupid when the full container is returned to you and your disappointed preschooler, and you might even burst into uncontrollable, embarrassing, pregnancy tears. Not that I would know from experience or anything.
Posted by Ruth M at 8:35 AM 1 comment:

English As She Is Spoke, by Addie 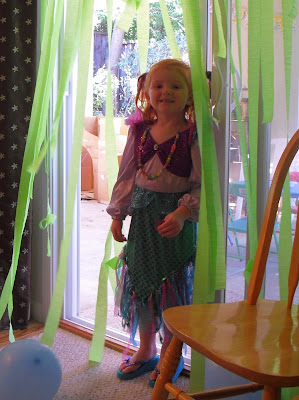 A long time ago, I read about a book titled "English As She Is Spoke" According to Wikipedia, it "was intended as a Portuguese-English conversational guide or phrase book, but is regarded as a classic source of unintentional humour, as the given English translations are generally completely incoherent." I have thought of this book often since I have been a mother. Sometimes I'm not sure English is my children's first language. However, while Chloe and Maggie have thus far been content to adapt pronunciations to suit their own needs, Addie prefers to completely create new words out of the ether. Sometimes I can figure out a definition, but not always. Here are a few of my favorites:
Lately, Addie has moved on to longer words. At least four syllables. These words typically only get used once or twice, but hey, if you need the right word for a certain situation, you need the right word. They include such winners as Expitating, Conferating, and Flusterated. Flusterated actually makes perfect sense to me. 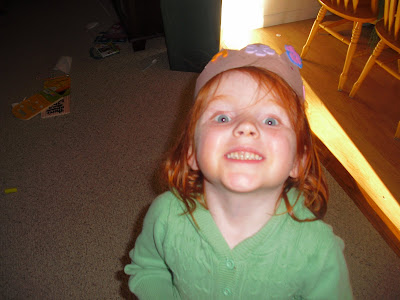 Wow, what a . . . smile? The dead tooth in the front really makes it pop. Oh, Addie girl, you do make me laugh. And shake my head. As Addie once said to Maggie, "You get what you get and you don't get upset. And many moooorrreee!!"

I'll let her dance you out. 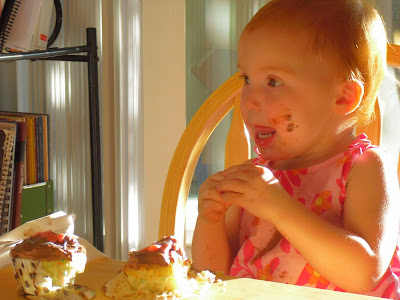 Our little Maggie Moo is quite the little talker, and always has a lot to say. And like her sisters before her, she plays pretty fast and loose with the English language to better suit her needs. For instance, she likes to make one pronunciation work for multiple words. For instance: 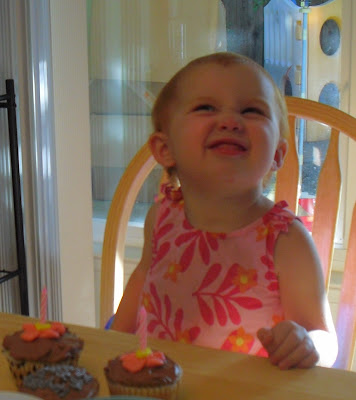 She has a lot of other little phrases she uses that I love. Such as: 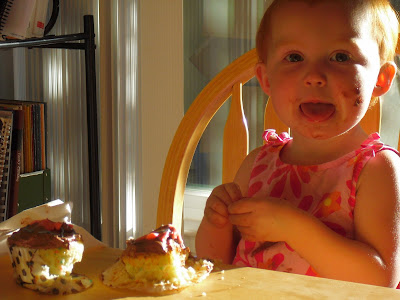 Finally, Maggie is not a fan of adjectives, at least when used to describe her. I'll ask, "How did you get so cute?" Response? "I not cute, I Maggie!" in the same vein, she will get angry if called any other name than Maggie. Margaret Melissa--who is that? Also, do not call her a baby. As far as she is concerned, she is just as grown up as her sisters. Thankfully, though, she is still small enough to love and cuddle on as much as I want. She really is the best cuddler I've had.

And one more super cute thing about Maggie. Whenever she sits or lays down, she always crosses her ankles. It kind of kills me.

All right. Enough. I'll let her dance you out to close this blog post.