For Chloe's first birthday, I bought her 3 small 10 cent fish. I think they died before we even reached home.

I refused to be defeated and bought her one more expensive fantail goldfish. His name was Fish. He was orange and white, and Chloe loved him. She loved him so much that at 18 months, she figured out how to scale the front of her dresser and get on top of her changing table so that she could reach the fishtank. One day I found her up there, something clenched tightly in her little hand. It looked like a hairbow sticking out of her fingers, so I didn't worry about it until I noticed the water everywhere, and the piles of gravel, and finally, the empty fishtank. How she caught that sucker I'll never know, and how he survived the ordeal virtually unscathed is nothing short of a miracle. Sure, he always swam upside down after that, but he moved with us from our apartment to our first home and swam cheerily inverted until one day when he choked on a large bite of food. I think. Chloe's not talking.

A few months after Fish passed, Chloe won a little fish at a party by throwing a ping pong ball in his bowl. His tiny, little bowl. Nemo lived in that bowl for several months, in increasingly cloudy water, until I realized he actually was going to stay with us. I went out, bought a new, bigger aquarium and a couple buddies for him, and now we had Nemo, the feeder fish, Tinkerbell, the calico fantail, and Gill, the Black Moor.

Addie and Chloe took turns doing this to the tank. 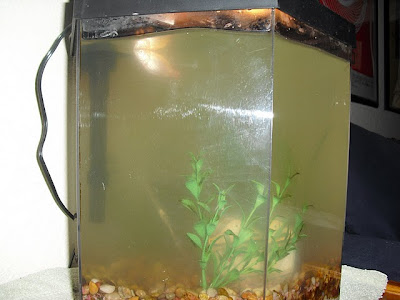 That's about half a can of flake fish food in there. And yes, the fish are actually in there, too, somewhere. You can see Nemo at the top. He's looking pretty bloated.

That batch of fish stayed with us for a couple years. Gill gradually changed color from black to gold, and grew to dwarf the other two fish. When they died several months ago, I'm pretty sure he had something to do with it. But he's not talking.

So now, giant, orange Gill has the tank all to himself. Until Maggie decides he needs extra care. Whereas the other girls were content to just encourage the other fish into obesity, Maggie has concern for his entire well being. For instance, the other day he must have looked like he had a cold because I found half a box of tissues floating in the top of the tank.

Another day, he looked bored and illiterate, so she provided entertainment. 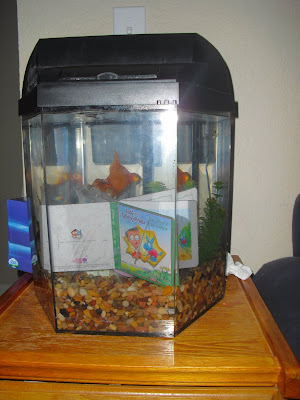 Not only did she give him a book to read, but she drew pictures on the outside of the tank.

Maggie also likes Gill to feel a part of our holiday celebrations. A few weeks ago I discovered several small plastic carrots, collected from other Easter decorations, resting on the the bottom of the tank. I decided to leave them there. I figured they wouldn't dissolve, and Gill's big enough that if he decided to eat one, I think he really could get it down.

Most recently, one day I decided to break out of my usual morning lethargy and do a little gross housekeeping, namely cleaning out the shower drain. I removed several large, cheesy looking hairballs from its depths, then went to check on the kids in the kitchen. As I walked past Gill's home, I did a double take. I saw something resting on the bottom of his tank that I could have sworn I had just placed in the garbage can in my bathroom. I looked closer and realized that Maggie had now decided to share her favorite breakfast cereal with Gill. 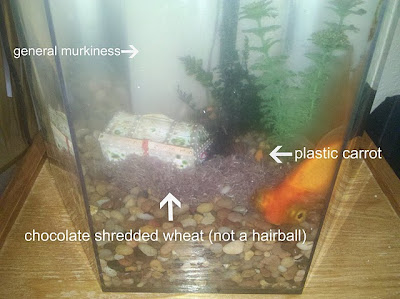 Am I wrong in thinking that looks like something that would generally be found in a drain? I think not. This particular mess turned into several days of cleaning because even after I had removed all the shredded wheat and cleaned the entire tank, the water kept clouding up. I choose to think that it was leftover from the initial cereal hairball, and not because Maggie was pouring her milk in the tank. But I could be wrong.

(In case you don't know, you can now buy Chocolate Frosted Mini Wheats. They are delightful. And my kids love them. They (and the fish) eat more of them than I do. Plus, nutritionally, they are healthier than a bowl of Raisin Nut Bran (I did a comparison for Bracken's sake when he started complaining about how good our kids have it). But seriously, healthier chocolate cereal that actually tastes like chocolate. Have you tried the Special K Chocolately Delight? It tastes like death.)
Posted by Ruth M at 4:15 PM 4 comments:

At least my hearing is good

I am often amazed by the different sounds I can identify throughout my house during the day while in another room. For instance, I know which child just hit which other child just by the sound of the slap. I also know each and every time a certain child got up and snuck into the bathroom after bedtime the other night (4 times over the course of 2 hours), and I also know, just by the sound, that SHE DID NOT ACTUALLY HAVE TO GO. She just didn't want to go to sleep (and thanks to her antics, my sleep schedule got thrown off, too). I can hear when toilet paper is joyously being unrolled straight into the toilet by a toddler. And interestingly, the other day I was clearly able to distinguish exactly which knives that same toddler was pulling out of the knife block. One of my favorite sounds is the moment a child goes from pounding on the bathroom door with a fist, to lying on the floor and kicking the door. It is accompanied by the sound of defeat, in case you were wondering.

The one sound I truly cannot determine, though, is the silence after I emerge from a solo shower. And by solo, I don't mean that I was singing, I mean by myself, with no other people. And if I indeed had the opportunity to shower by myself, chances are, I took my time. And I probably sat down on my shower bench for a while and contemplated the wall. I would blame that little hobby on my pregnancy, other than I do it all the time. Sure, my mind occasionally wanders with concern that my children are up to something, but generally I am able to calm myself by thinking, "It's probably too late to stop them now, I might as well take my time."

However, once I leave the shower and can actually hear, then I start to worry. I turn off the water, I turn off the exhaust fan, I may even turn off the ceiling fan in the bedroom, and I cock my ear to the bedroom door. Silence. But what kind of silence? Is it the sound of happy children, playing quietly and contentedly in the other room (wishful thinking)? Is it the sound of brain dead children, immobile in front of the television (realistic wishful thinking)? Or is it the sound of children who are no longer able to speak, and are barely breathing in the aftermath of the havoc they have wreaked during the 15 (30) minutes I was ignoring them?

The simple answer is not so simple. It seems obvious that I should just open the door and see what is going on. But alas, despite the fact that my children cannot hear their own name shouted at them from 2 feet away, they are intimately tuned into the sound of my bedroom door opening and will come running as soon as it is cracked. Then, as I attempt to complete my daily beauty regimen, I will be subjected to many questions, such as, "Why are you wearing that? What is that for? Why does your body look like that?" I will also have to fight the toddler for every makeup brush and product I attempt to use. I will have to fish things I don't want thrown away out of the trash can and/or toilet. And I will have to break up fights. Assuming, of course, that this is a day when I actually groom myself. The chances of that happening decrease dramatically with each additional child in my room.

Also, if I leave the room before getting dressed, and they are indeed near death, I know I will immediately become consumed with life saving tactics and concern for their well being, and will be physically and mentally unable to dress myself at that point. And that means 911 would be showing up at my house to find that not only was I neglecting my children, but I like to be nude while I ignore them. I'm thinking being fully clothed, maybe even in a coordinating outfit, would make me look much better.

So I try to find a happy medium. I try to at least get my underwear on, and some of my clothes. Because it is not so easy to try to wipe the bottom of a toddler who has taken off her poopy pullup and started trying to climb onto the potty by herself when you are also trying to hold your towel up at the same time. And, as I learned today, it is much easier to clean a lot of chocolate shredded wheat out of the fish tank while wearing pants.
Posted by Ruth M at 4:27 PM 5 comments:

A couple months ago, Bracken and I saw True Grit in the theatre. Bracken immediately put the original on our Netflix cue. Although I had been raised on a steady diet of John Wayne by my father, somehow I had never seen it, and neither had Bracken. As much as we enjoyed the Coen brothers' adaptation, we felt we should watch John Wayne's Oscar winning performance for comparison.

And I ended up being much more interested in Kim Darby. First, I noticed that she had the ever sexy Julie Andrews hairdo. 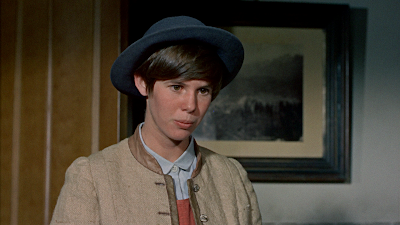 Then we noticed that not only had she stolen her hair, she'd also completely ripped off Maria's traveling outfit in The Sound of Music. 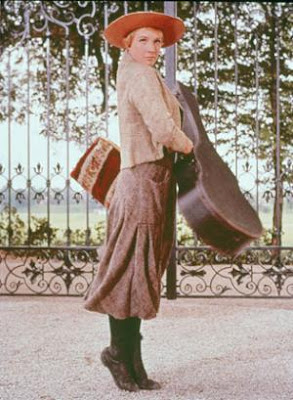 Yup, right down to the special skirt and boots. 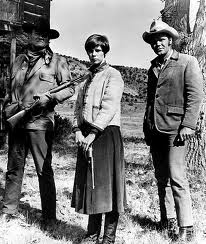 However, there was definitely less singing in True Grit. 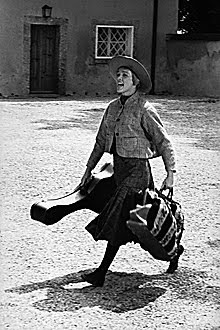 However, I was (mostly) able to overcome my distraction with Kim's tribute to Julie, until Bracken turned to me and said, "It's got raisins in it . . ." 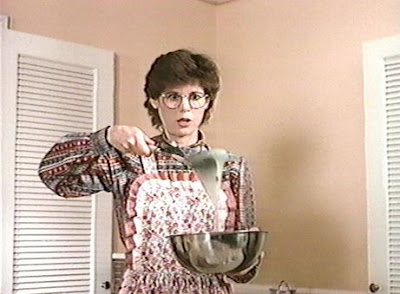 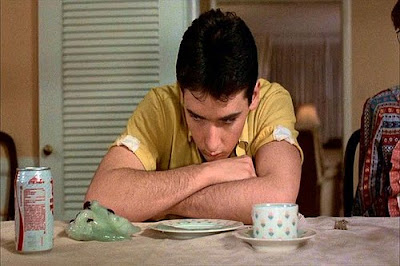 And then, the comparison was all over for me. I vote for the new True Grit. Not only did it not have Kim Von Trapp in it, but that running scene at the end . . . .
Posted by Ruth M at 7:08 PM 2 comments: